Beneath a Steel Sky was released for the PC in 1994 by Revolution Software. It was received well and has gone on to be considered a cult classic. It uses the Virtual Theatre engine which was first used in Lure of the Temptress and among other things allows the non-player characters to have a basic level of artificial intelligence.

It is set in a dystopian future where man has damaged the earth. The action is confined to Australia within a totalitarian city state called Union City, and you play Robert Foster who has just been kidnapped from an area outside the city known as the Gap. Before Robert knows why he has been kidnapped his helicopter crashes in the city and he makes a bid for freedom. It is now your task to find out why he was kidnapped and keep him safe. 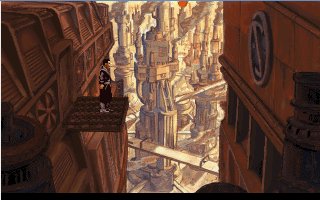 Despite the games dark storyline and brooding atmospheric graphics, the game is full of humour. The characters are warm and engaging and their speech completes their characterisation. Interacting with the characters is realistic and draws you further into this world.

The music is not the best you've ever heard, but it does work well to add to the tension and feel of the game. In particular it is clever how the musical score and sound effects make good use of low pitched sound to increase the sense of unease. In some rooms you directly feel the effects in the pit of your stomach, and this can put you quite on edge. 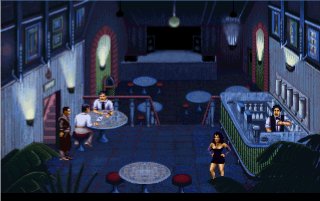 The easy to use interface means that you face little distraction during the game, and hence you feel more a part of it. You left mouse click to examine items, and right mouse click to trigger actions. The inventory is reached by moving your mouse to the top of the screen. It couldn't be easier and this saves you from having to go through lots of strange actions to see what works. I'm also happy to report that although there are a few places that you can die, there are no actions that can't be undone which stop you from progressing later on.

I have fond memories of playing this game and really feeling a part of the action. Once I had finished it, although I was happy to have completed the adventure, I did feel a little sad that I was no longer exploring that world. I can see myself playing this game again soon.

##How Can I Play It Today? In 2003, Revolution Software made the game available for free. It can now be run via the ScummVM emulator on most modern platforms. For more information about ScummVM, why not take a look at my article: Using ScummVM to Play Classic Adventure Games. Beneath a Steel Sky can be downloaded from the ScummVM site's download page. I hope you enjoy playing this game as much as I did.

Beneath a Steel Sky, My Favourite Graphical Adventure Game by Lawrence Woodman is licensed under a Creative Commons Attribution 4.0 International License.

ScummVM is Virtual Machine, that allows you to run adventure games created for a number of game creation engines. This is a great way of playing those classic adventure games that you loved so much, o...   Read More