Mission: Impossible simulates a foreign espionage mission based on the TV series. Your mission, should you decide to accept it, is to recover the objects or person taken by enemy agents and hidden in a foreign state building.

The game begins by detailing your mission which must be completed within a set number of hours determined by the difficulty level that you have chosen. In order to complete it you have to move from location to location discovering what is in the area. There are lots of terrorists which should be avoided and also enemy agents which will try to kill you. During each move you can 'Discover' what is in a direction; move 'North', 'South', 'East' or 'West'; get a 'Report' detailing your current status or look at the 'Map' (which will have plotted what you have discovered so far on a 10x10 grid). Each action that you undertake will take one hour.

Along the way you can visit any of five headquarters where you can acquire additional team members, secret code books and intelligence reports to help you. The main strategic elements of the game come down to how to most efficiently navigate the area and choosing the optimal number of team members to assist you. You must find the correct foreign state building and complete your mission within the time you have been given. 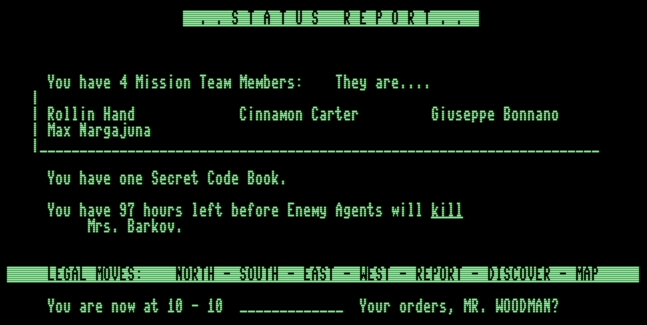 The game was written by Richard S. Altman and released in 1989 as shareware. It is one of a number of games such as BLACKJACK, CRAZY EIGHTS and TEASER that he wrote in MBASIC for Kaypro systems.

It is quite an interesting strategy game and a great example of what a determined programmer can do with MBASIC. It is definitely worth looking at the BASIC source code to see how he did it, though I should warn that it isn't for the faint-hearted.

You can find Mission: impossible on the WALNUT CREEK CD and all you need to do is combine it with an MBASIC interpreter and it should work fine on a Kaypro as well as other systems that use or emulate an ADM-3A terminal such as the Commodore 128.

Mission: Impossible can be seen being played on a C128 running CP/M in the video below.

Mission: Impossible on CP/M by Lawrence Woodman is licensed under a Creative Commons Attribution 4.0 International License.