Hamurabi is probably the best known land and resource management game on CP/M. However, there are a few other similar text-based games that sought to extend the concept such as Dukedom and Kingdom. The ones shown in this article were all written in BASIC and are fun to play as you work out the best strategies for each. 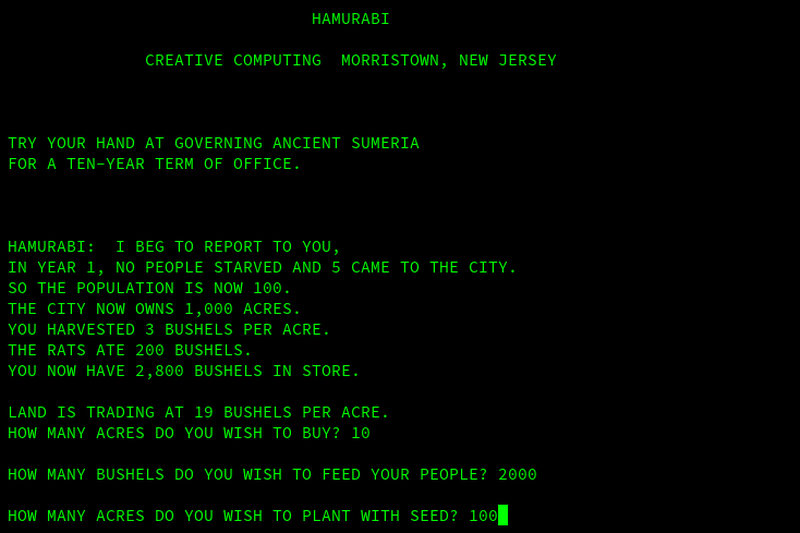 In this game we play Hammurabi, the Babylonian King, as we rule ancient Sumeria for 10 years. Each year we can buy and sell land, feed our population and plant seeds on our land. At the start of each year we get a report covering the previous 12 months which details the number of people who starved, the number who came to the city, the current population, the number of acres of land owned by the city, etc. During this time we face various perils such as rats eating the harvest and plague. If we don't perform well we'll be thrown out of office and if we do make it to the end of the 10 year period our rule will be judged and we will given an assessment of it.

Hamurabi can trace its origins to The Sumerian Game created by Mabel Addis and William McKay in 1964 on an IBM mainframe. This original game went on to inspire conversions to other systems before being taken up by David H. Ahl who ported it to BASIC and it received more wide spread attention when he published it in 101 BASIC Computer Games. Hamurabi is available as an mbasic compatible BASIC program in a collection of Creative Computing Games. 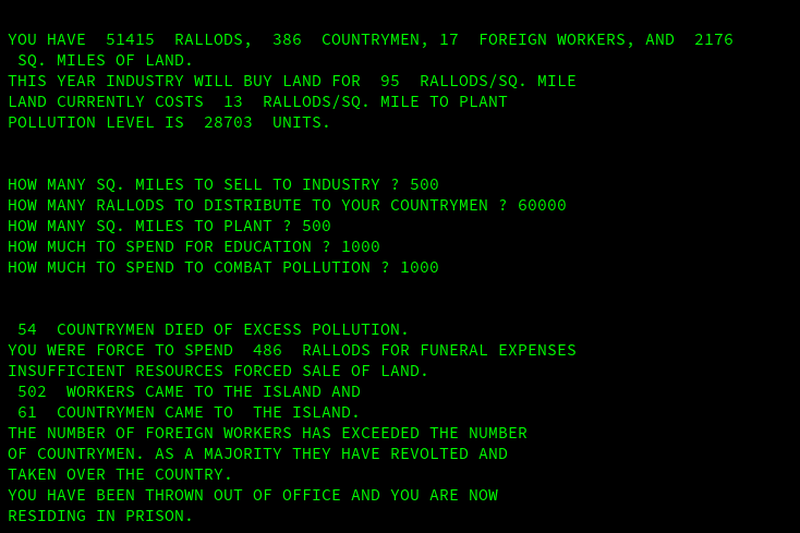 Kingdom is similar to Hamurabi but the setting is different and we now have only 8 years in office. As with Hamurabi we get yearly reports but now we can sell land to industry, distribute Rallods (Plural of Dollar backwards) to our countrymen, plant on the land, spend on education and combatting pollution. These different options lead to different dynamics and features of the game such as tourism becoming an option for the area that we are governing.

Wikipedia mentions that Kingdom was created in 1974 by Lee Schneider and Todd Voros. However, I can't say with any degree of certainty that the mbasic compatible KINGDOM.BAS contained within volume 13 of the CP/M User Group software distribution disk is the same program as it contains no comments referring to its origins. 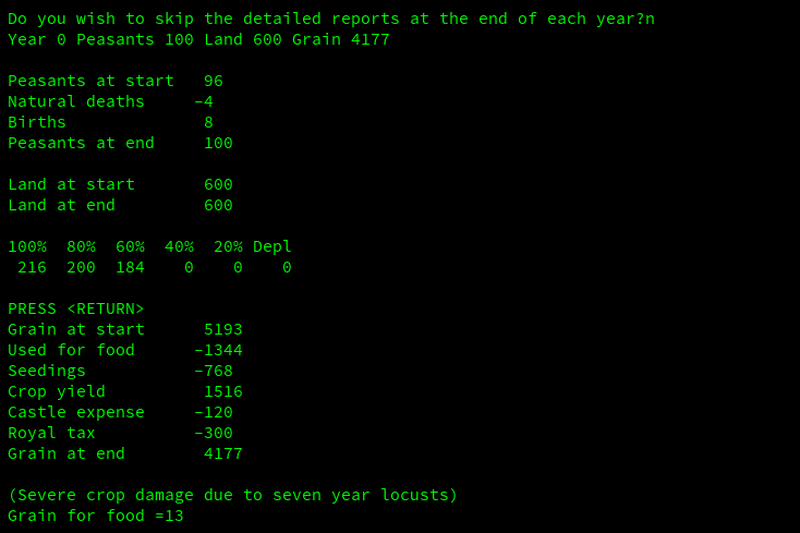 Dukedom was originally written by Vince Talbot in 1976 as an extended version of Kingdom. Although in many respects it is quite different. Dukedom introduces the concept of land being overused and therefore depleted of goodness. This effects the price you get for land as well as its yield. Therefore as part of the reports you get an assessment of the quality of the land you own. The hazards in this game include rats, locusts, plagues and poxes. There are taxes charged by the king and sometimes he will request payment or peasants to replace his that have starved. In addition to all this we can end up at war with neighbouring Dukes which leads to extra features of the game such as choosing who attacks first and whether to hire mercenaries.

These extra features should make the game more interesting and I do like that with Dukedom we can enter the figure for the amount of grain to use for food as either a total amount for the population or as a per peasant figure. However, at the moment, out of these three games I prefer the simpler Kingdom. Although I suspect that may change the more I play Dukedom.

The version of Dukedom on the Walnut Creek CD comes with extensive instructions and appears to be a compiled BASIC program written by Richard A. Kaapke. The executable requires a Z80 to run.

The following video shows the three games being played on CP/M.

Hamurabi and Similar Games on CP/M by Lawrence Woodman is licensed under a Creative Commons Attribution 4.0 International License.