My favourite traditional board game is Backgammon and the best version I have found for CP/M is The Peelgrunt Game of Gammon IV, v2.0 released 1st April 1986 by David C. Oshel. It is available on the Walnut Creek CD.

Gammon IV is a little unusual as play is set on another world and you are given a choice of three characters to play against, each with their own style. Other than that the game is much the same as any other version of Backgammon. The game is introduced with the following: 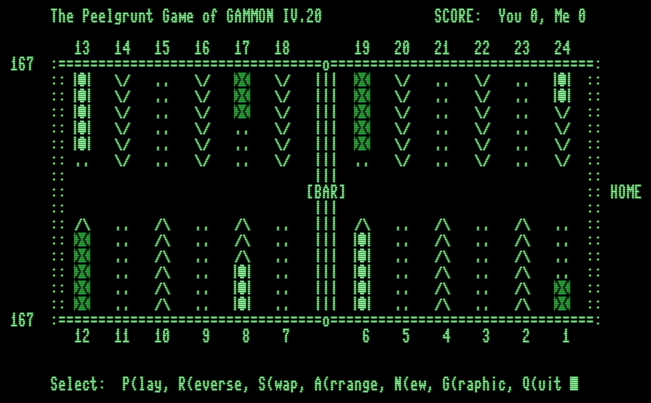 The game is quite flexible in that you can choose which way round you want to play, which stones you want to use, whether you want to use your own dice and you can even arrange the stones manually. The gameplay with each of the three characters is fairly good for beginners and I like how each of their personalities is expressed in their gameplay. The controls for the game work well and overall it is an enjoyable game to play.

Gammon IV is compatible with the 8080 and is configured for ADM-3A terminals by default. If you have a Kaypro or compatible system such as the Commodore 128 then you can press 'G' to enable a graphics mode which displays the stones using extended character graphics. You can configure the terminal by patching the relevant bytes in the .COM file or by altering the included C source code and recompiling with the Software Toolworks' C/80 v3.1 compiler.

Video of Gammon IV Being Played

You can see Gammon IV being played on a Commodore 128 in the video below:

Backgammon: The Peelgrunt Game of Gammon IV on CP/M by Lawrence Woodman is licensed under a Creative Commons Attribution 4.0 International License.