Instrument Flight Simulator is a text mode flight simulator for CP/M which uses standard ASCII characters to display an instrument panel for the plane. The aim of the game is to land the aircraft safely by following the instructions given by air traffic control through a window at the top-right of the screen.

I haven't been able to find out much about it other than through adverts in Micro Cornucopia. There is also a review of it in FOGHORN Volume 7, No. 9, but I've been unable to find a copy of the rest of the magazine.

The version of the flight simulator on the Walnut Creek CD is configured for an ADM-3A terminal so it will work as configured on common machines such as the Kaypro and Commodore 128. It isn't as advanced as the version mentioned in the Micro Cornucopia advert but is still worth playing. 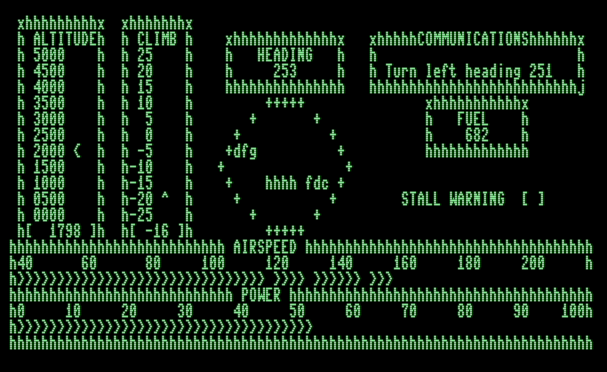 The game is controlled by using the numbers on a numeric keypad, so that you can raise and lower the nose; increase and decrease the power; turn left, right or fly straight. The control system works pretty well once you get used to it and the display is clear and easy to understand. The one thing I do find difficult is to keep the rate of climb steady but then this adds to the challenge.

To complete the game you have to follow the instructions in the 'communications' box as they direct you through the landing phase of its flight. You only have a limited amount of fuel and if you fly too slow the plane will stall. Finally you must avoid the 100ft hill at the far end of the runway.

Instrument Flight Simulator is a fun little game and can be seen being played in the video below.