The VIC-20 had a number a spreadsheet programs released for it which despite the limited resources of the Vic could actually be quite usable. The two best known are SimpliCalc and PractiCalc, but there were others such as TechniCalc and BusiCalc as well as one written in Basic to use a 40 column extension such as FAT-40.

We also have another similar article: Word Processors on the Commodore VIC-20. 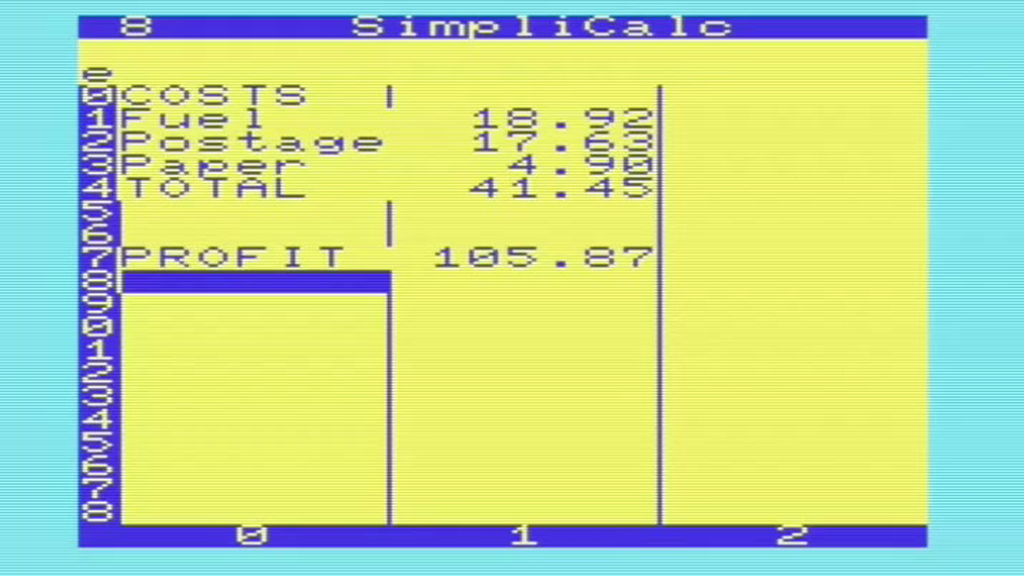 SimpliCalc was originally written for the Commodore PET and was later released in about 1983 by Commodore Business Machines for the Vic. It was available on cassette tape and disk. The spreadsheet works quite well and supports mixed case text which can make the sheets easier to follow and is something that PractiCalc can't do.

Overall it's a good early spreadsheet but a little simplistic compared to PractiCalc. A disk image can be found on cbm8bit by searching for simplicalc.d64 and clicking on simplicalc.d64 from the menu. The manual is available on archive.org. 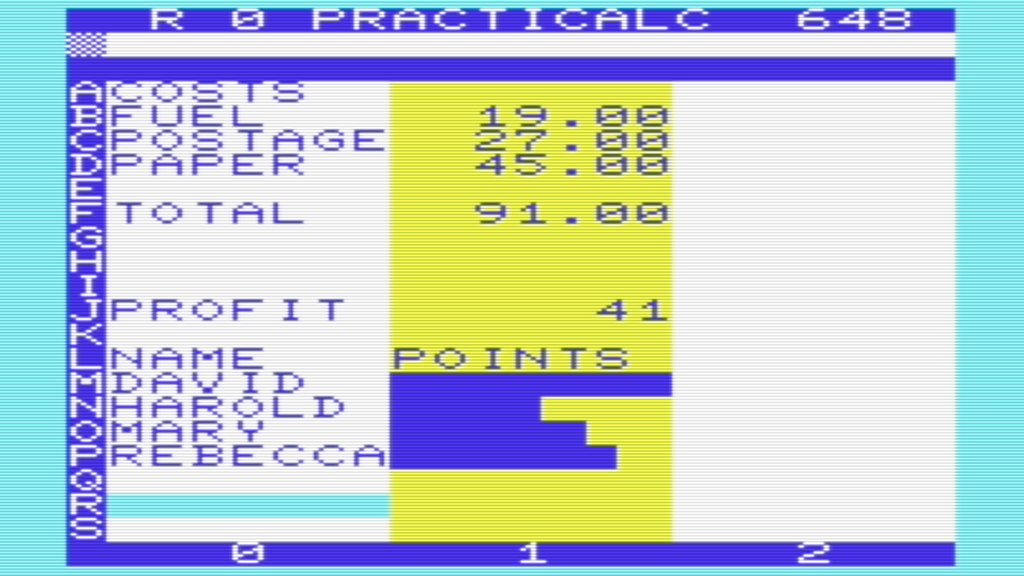 PractiCalc was released in about 1982 on tape and disk by Computer Software Associates and is a really impressive piece of software for the Vic. It is quicker than SimpliCalc and supports many of the features of modern spreadsheets such as formatting, complex formulas, column resizing, moving and inserting rows and columns, etc.

One thing that is particularly interesting is that you can automate part of the data entry by using a formula in a cell such as ?sales smith, which when the spreadsheet calculates the formulas it will prompt the user to give 'sales smith'. Therefore if you had a spreadsheet where you regularly change the entries such as for sales reps each month you could put a similar formula in for each rep and then the program would just go through and prompt you for each entry before calculating the final figures.

PractiCalc was also capable of displaying histograms inline by representing a number in a cell using either stars or in hi-res mode by having a smooth graphical representation.

The manual for PractiCalc Plus is available from BombJack and this manual, as far as I can tell, seems to be compatible with the version of PractiCalc available on Zimmers. I have also come across a version mentioned in a thread on the denial forums about PractiCalc which says that it is PractiCalc Plus.

Video of SimpliCalc and PractiCalc

You can see SimpliCalc and PractiCalc being used on a Commodore VIC-20 in the video below:

Spreadsheets on the Commodore VIC-20 by Lawrence Woodman is licensed under a Creative Commons Attribution 4.0 International License.

Word processing is possible on the VIC-20 and can be surprisingly comfortable despite the small screen text area. Here I will show a variety of word processors each of which handles the 22 column rest...   Read More


If you have good eyesight, a well-tuned display and patience it is possible to use 80 columns in software on the VIC-20. This is really just an experiment but considering the limitations of the Vic I ...   Read More