With a little lateral thinking and by putting the television on its side we can create a 64 column sideways text mode on the VIC-20. This article will demonstrate this and show how it is done. Previously we've shown 40 columns in BASIC which has been around for decades, however I have never seen anyone use this trick to get 64 columns before.

Putting a television on it's side may not be safe and we take no responsibility for any damage or accidents caused by trying this. The television will probably be unstable on its side and the components inside are not designed to function in this way.

Laying out the Screen Map

Normally hi-res graphics are achieved on the Vic by putting a different character in each screen location from left to right, top to bottom. Therefore the first screen location has character 0 (@), the next character 1 (A), etc. We can then alter pixels by just redefining these characters in the character definitions map in memory that contain those pixels.

However, because we are using the screen sideways we lay out the screen map so that character 0 is at the top right of the screen if viewed in its normal orientation, then character 1 below it and this continues down each row and to the left for each column. If viewed sideways this would look like the same layout as is normally used.

Each characters is defined using a series of 8 or 16 bytes depending on if we use 8x8 or 8x16 characters. Previously we've shown 40 columns being used in BASIC and this was achieved by using 4-bit wide characters and reducing the number of text columns to 20. This allows two 4-bit characters to fit in the space of each 8-bit wide character definition and therefore provide 20x2=40 columns of text. 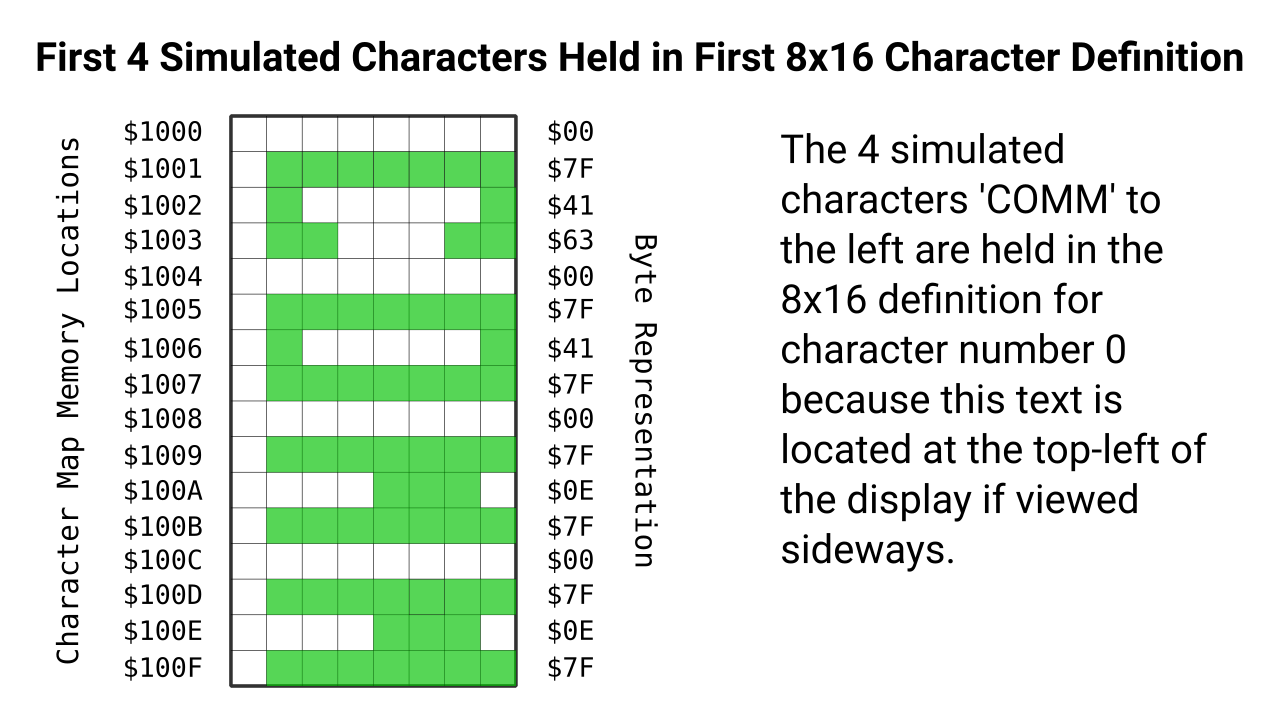 For this sideways text mode we will put the character sideways and therefore each 8x16 character definition can fit four characters. We laid out the screen map so that the characters run from left to right and top to bottom when viewed sideways.

The Vic allows us to alter the screen dimensions and on a PAL screen we can get a maximum of about 27 columns by 33 rows. If we used 4-bit wide characters this would allow 27x2=54 columns of text although this may be hard to fit on some television sets. If instead we were to look at the 33 columns of text sideways on the screen this would allow 33x2=66 columns if viewed using 4-bit wide fonts on their side. 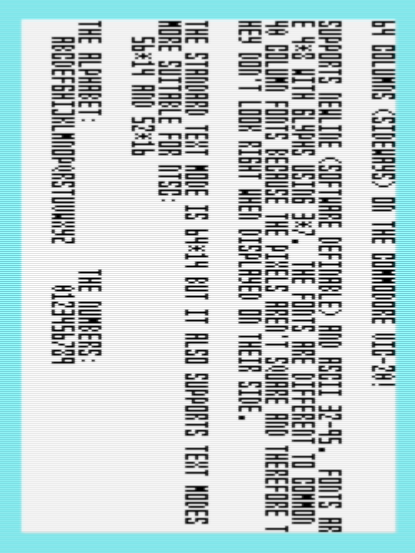 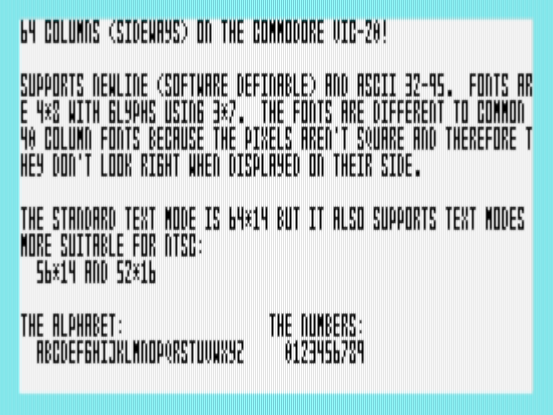 I think it may be possible to extend this to a 64x15 text mode by overlapping the screen map and character map but I haven't experimented with this yet. If I manage it I will publish the details at a later date.

This works well on PAL displays but because NTSC has less screen real estate 64 columns sideways isn't really possible. However, people in NTSC land I haven't forgotton you. Text modes, 56x14 and 52x16 should be possible without any problem and still gives a considerable boost.

I love 64 column displays such as on the TRS-80, Exidy Sorceror and SOL-20. I particularly like 64x16 displays. It's a bit of a shame I couldn't easily stretch the Vic to do 64x16; I do have an idea about how to do this in the future, although it may make the screen update a bit slow.

This text mode is naturally a trade-off, what we gain in simulated columns we lose in rows, that's without even mentioning the fact that the text is being printed sideways.

I've put some example code into a github repo if you want to give this a go and I'd love you hear what you think about all this and whether you think the trade-off is worth it.

The following video shows the 64 column text mode in action.

64 Column Text Mode on the Commodore VIC-20 by Lawrence Woodman is licensed under a Creative Commons Attribution 4.0 International License.