If you have good eyesight, a well-tuned display and patience it is possible to use 80 columns in software on the VIC-20. This is really just an experiment but considering the limitations of the Vic I think the results are quite good. While it looks hard to decipher to start with, over time it becomes easier to use.

In order to be able to display 80 columns on the Vic I have created a 2x8 bit character set. The characters can be seen in the image which is displaying ASCII characters 33-126.

While designing the characters I was careful to consider what they would look like next to other letters - this can be seen with the 'h', for example, which if placed next to another letter will invariable look like the final down leg is present.

The code for this is in the display80_vic20 repo on GitHub and contains the routines to display the text in 80 columns along with some test programs.

Since the font is 2x8 this means that four characters fit side-by-side in the space of one 8x8 Vic character and therefore if we use twenty Vic columns of text we can get eighty columns across. To help increase our ability to see the character boundaries the colour of the characters alternates between blue and black every fourth eighty column character. 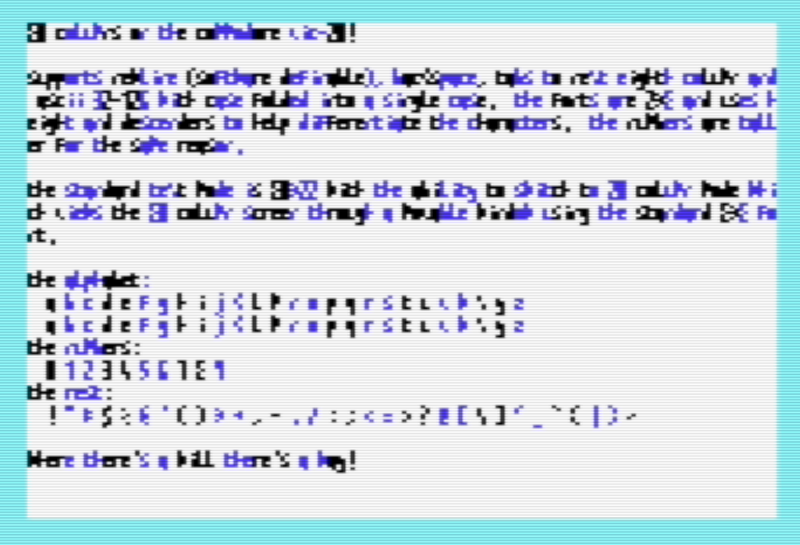 For comparison the text being displayed in the image is as follows. 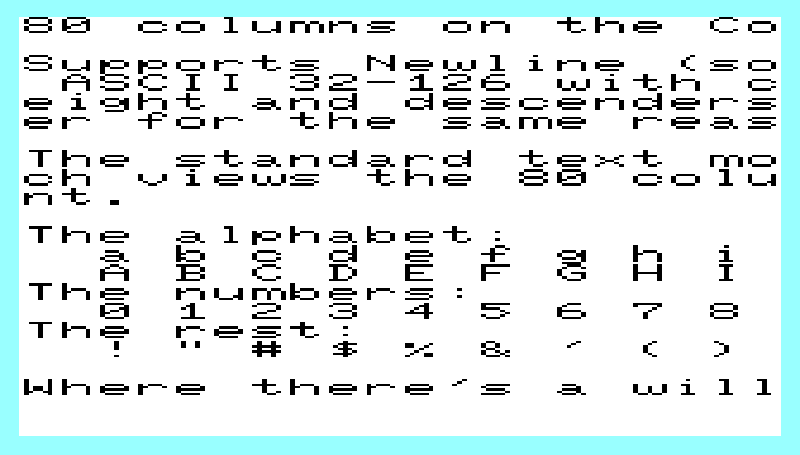 The software also supports switching to a 20 column mode which uses a movable window to display a quarter of the 80 column screen width. In the test programs I have used the function keys: F1, F3, F5 and F7 to easily move the window between quarters of the screen width. 80 column mode is accessed using F2. The 20 column mode is particularly useful to not only clarify certain character combinations which can look similar but also to see which characters are uppercase and which are lowercase.

The following video shows the 80 column text mode in action.

This article is one of a number articles covering different text modes for the Vic. The others may also be of interest.

80 Columns in Software on the Commodore VIC-20 by Lawrence Woodman is licensed under a Creative Commons Attribution 4.0 International License.

With a little lateral thinking and by putting the television on its side we can create a 64 column sideways text mode on the VIC-20. This article will demonstrate this and show how it is done. Previo...   Read More