I recently came across an interesting program called DABAR to drill Hebrew vocabulary. The program works in a similar way to flash cards, by displaying a word in Hebrew and then asking for its English translation. To keep the program portable it uses ASCII art to display the Hebrew characters, which is important because at the time it was created there was little support for Hebrew characters on computers. 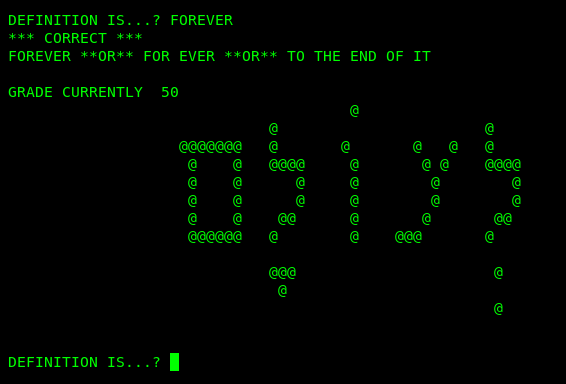 DABAR 1.0 was released in 1986 by Daniel R. Crider while he was studying at Southwestern Baptist Seminary. It is written for Microsoft Basic v5.2 and he says that it should run with little or no change on MS-DOS and TRSDOS systems. The version linked to is from the Walnut Creek CD.

The program's main mode of operation is reviewing vocabulary where it will ask you for the English translation of a word it has shown you in Hebrew. The Hebrew font is quite good once you get used to how it represents certain similar letters such as Samekh (ס) and Mem sofit (ם). DABAR also seems to use some sort of spaced-repetition to reinforce words that you have got wrong more often than right.

I've been quite impressed with DABAR and how it overcomes the lack of Hebrew support on text terminals. The program is expandable so that you can add your own words to the vocabulary and comes supplied with 130 words to get you started. Although there are more sophisticated programs available now, for 1986 this was quite a nice piece of software and because it was written in Basic it would have been easy to extend and customize.

You can see DABAR being used in the video below:

DABAR: A Hebrew Vocabulary Drill System on CP/M by Lawrence Woodman is licensed under a Creative Commons Attribution 4.0 International License.