There has been a lot of talk in the UK recently about whether when you were born affects your schooling. Lots of teachers have noticed how pupils born at the end of the Summer often struggle compared with those born in the Autumn, which makes sense because the latter group are almost a year older when they start school than the former. However, teachers are not the only ones who think that when you were born affects your future. Astrologers base much of what they do on when a person was born.

To see if when you were born does affect your future, I have decided to look at various groups over a series of articles. For this, the first article, I am beginning with Nobel laureates, as they come from many different countries, represent excellence in their field and they are reasonably well documented on wikipedia. The data for the study was collected by using ScraperWiki to build a series of scrapers and views to go through the List of Nobel laureates and find the Date of Birth for each person.

The dates of birth were collated and from this frequency charts were constructed for the months of birth and star signs of the Nobel laureates. The findings are illustrated below.

Distribution of Months of Birth Among Nobel Prize Winners 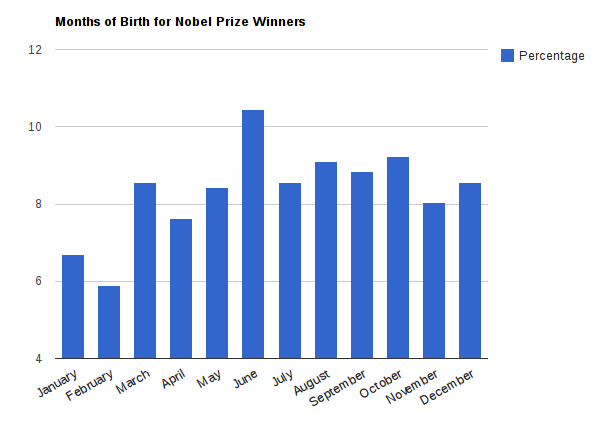 There is not too much difference here between the months, although June does stand out as having significantly more Nobel laureates than other months, and in fact is 3.75% ahead of the lowest month, January.

February is interesting because it would be expected to be a bit lower since it has less days. If you look at February's lowest number of days compared to the highest number of days in other months you will see that it can have as little as 90% of the days (28/31 = 0.9032). This is enough to account for its low percentage as if you take March with 31 days and take 90% of its figure you would get 7.74% (8.57*0.9032), which is a little low, but not markedly so. 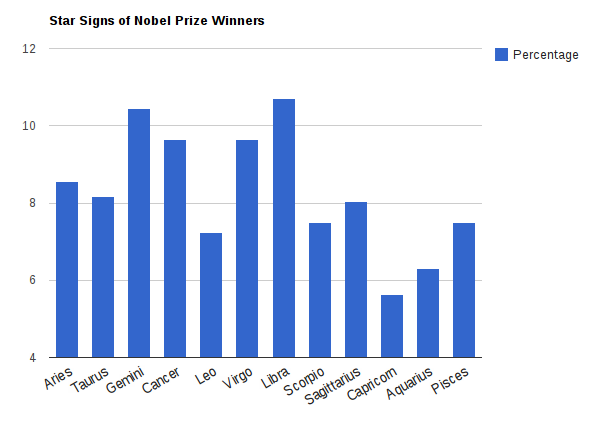 There does seem to be some variance between the birth periods and interestingly this seems to be more pronounced for star signs than for months of birth. In particular, Geminis and Libras or people born in June do stand out as being more likely to receive a Nobel prize, whereas Capricorns and Aquariuses or people born in January or February are less likely to receive a Nobel Prize.

This study highlights the power of scraping the web to extract these sort of statistics and given the time, this could be extended to increase confidence in the data and draw more accurate conclusions. If you would like to commission, vLife Systems, to create a scraper which will extract data from websites or other data sources of interest to you, please get in touch via email: info@vlifesystems.com.

For those interested, links to the views and the code for the scrapers is listed below. The code is current at the time of writing, but may have changed since, so please go to the original source to see the latest versions.

This was the first stage. The scraper was used to compile a database of Nobel laureates and links to their pages on Wikipedia. The original scraper is to be found on ScraperWiki: Nobel Prize Winners Names and Wiki Urls

The next stage was to scrape the Wikipedia page of each person and get their Date of Birth. The original scraper is to be found on ScraperWiki: Nobel Prize Winners' DOB

To visualise the results of the scraping I created a couple of views. I have decided not to include the code for these here as they are quite long and would be better off linked to. They can again be found on ScraperWiki: Nobel Prize Winners MOB and Nobel Prize Winners' Star Signs

Does When You Were Born Affect Your Chance of Becoming a Nobel Laureate? Scraping Wikipedia to Find Out by Lawrence Woodman is licensed under a Creative Commons Attribution 4.0 International License.

This is the second in a series of articles looking into whether when you were born affects your future. In the previous article I looked at Nobel laureates, which are, of course, from a range of field...   Read More


Now that I have converted TechTinkering over to Jekyll, I have come up against a bit of a problem with site.related_posts: The results are always just the latest posts, and are not filtered or ordered ...   Read More


I have recently released Mida as a Gem for parsing/extracting Microdata from web pages. Not many sites at the moment are using Microdata, in fact, apart from this site, I only know of one other: Trust...   Read More


I have been using Jekyll a lot recently on the Trust a Friend website and found the need to display a rating as a series of stars. Initially I implemented this in JavaScript, which worked fine, but I ...   Read More