The National Museum of Computing is the UK's largest museum dedicated to computing. It is located on the Bletchley Park estate just south of Milton Keynes and is easy to get to by car, bus or train. Tickets are £10 for an Adult, with a discount for booking on-line. They allow you access to the Bletchley Park museum and The National Museum of Computing for as many visits as you would like in 12 months. The museum has quite a few rare computing systems which the volunteers, that staff the museum, seem to be knowledgeable about and happy to discuss. There is plenty to look at and there is even a "hands-on" area where you can play with several computers from the 80s. I found it quite funny seeing some of those in particular as they seemed to have either shrunk or got bigger with time.

The museum has very much the feel of a workshop, but they have quite a few plans for re-organizing the museum and therefore exhibits are likely to be changing all the time. There are lots of interesting machines here such as DEC PDP 8s, PDP 11s, various Vaxen and a Cray Y-MP EL. However the following are particularly notable. 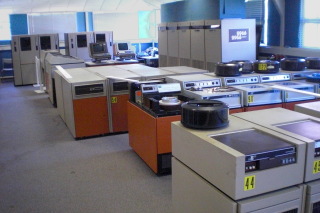 This ICL 2966 dates from around 1982/83 and is the largest system on display at the museum. It is currently undergoing restoration, but is still great to see. They have lots of disk packs for it and I'm told that the current set up is only about a third of the size of the original.

While the IBM 1130 was a popular system, with many in operation around the world, only a handful now survive. This is mainly as a result of IBM's preference for renting machines rather than selling them. I was particularly surprised to see this computer and look forward to going back in the future to see it operational. I have been in contact with some IBM 1130 enthusiasts in America, who have taken an interest in documenting this machine, particularly as TNMOC appears to have the only known set of diagnostic cards for the 1130. 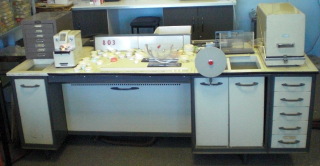 The Elliot 803B was made by Elliot Brothers in the 1960s and this is one of only two complete systems known to survive. It was fairly popular in the early 1960s and most British Universities and Colleges bought one. The machine is working and can be heard playing music for visitors. This is one thing I'm not too keen on, as I would prefer to see it working away printing and having the tape drive whirring away. Still, it must be difficult knowing how to demonstrate these machines as often they were just black boxes processing behind the scenes. Of particular interest, is the magnetic tape drive, which actually uses Iron Oxide coated 35mm Film Stock. An interesting choice, largely brought about because of the proximity of the factory to Elstree film studios. 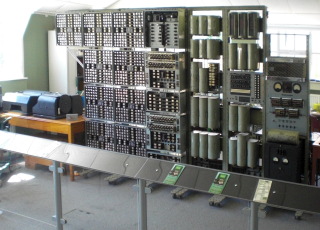 The WITCH dates from 1951 and has a fairly unusual design, in that it does much of its storage in decimal instead of binary. It does this through the use of dekatron tubes, which are counting tubes that can record ten different positions. I spent some time talking to one of the men restoring the machine and found it really quite interesting as he explained how it worked and how much the design of the machine was influenced by hand calculators. This will be excellent to see running with its dekatrons spinning and relays clicking. Once the WITCH restoration is complete it will be the worlds oldest original working computer! There are many computers that are described as being the first computer as it often depends on how you define a computer. The Colossus was the first partially programmable digital electronic computer which has been rebuilt by a team lead by Tony Sale and completed in November 2007. For many, this is the star attraction of the museum and it is wonderful to see a replica of a machine that was so important in cracking the German Lorenz SZ 40/42 Cypher during the Second World War. This machine can be seen running and is actually quite interesting to watch, particularly seeing the paper tape rotating around so quickly on its wheels. 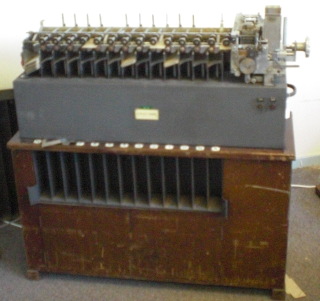 It would be very easy to walk into this room and then out again, thinking that it just contained various mechanical corpses. In actual fact it contains the punched card equipment that once belonged to a chicken farmer in the 1950s. The man who was overseeing the room was able to demonstrate each of the machines and explain their use. I found it fascinating chatting about the validators, sorters, tabulators, etc, and while I already knew a little bit about this sort of equipment, it really opened my eyes.

The museum has so much potential and it is vital that we can record, maintain and explore our computing heritage. Unfortunately the museum does not receive government or Bletchley Park funding, so if you can help the museum to continue to be able to operate and offer this great resource for generations to come, please go to The National Museum of Computing's Donate page.

The National Museum of Computing at Bletchley Park by Lawrence Woodman is licensed under a Creative Commons Attribution 4.0 International License.


If you have good eyesight, a well-tuned display and patience it is possible to use 80 columns in software on the VIC-20. This is really just an experiment but considering the limitations of the Vic I ...   Read More