I love ED on CP/M. It's often derided but I think it's just misunderstood and with a little practise its true value can shine through. It's elegant, easy to learn and only has about 25 commands but these can be combined. Once you get used to it most editing tasks are pretty quick. If I'm editing text that is made up of separate lines, ideally not more than the width of the terminal, I find it excellent. It does have a line limit of 128 characters so for continuous prose I will switch to something like Wordstar, but for editing source code and config files on CP/M, it's my first choice.

ED came as standard with CP/M and is only 7k for CP/M 2.2 and 10k for CP/M Plus. One advantage of ED is that it will work both with teleprinters and video terminals without having to be configured for each device. It is also good at manipulating large files even when the system is short of memory. 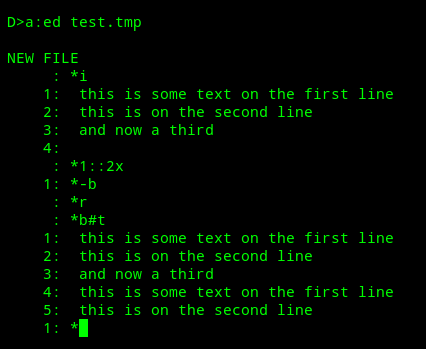 Like many early editors, ED is a modal editor which you start in command mode and while in this mode you can view existing text, move between lines and points in the line. It allows you to do standard operations such as copy and paste, inserting text from other files, searching for and replacing text, etc. When we want to enter input mode, we can use the 'I' command. This is much like VI, except that you can only enter text in the non-command mode but not edit it. To exit data input mode and return to command mode you use ^Z (CTRL-Z). These commands can be combined together and one of the most powerful facilities that ED has is the 'M' Macro command to repeat sequences of commands.

ED keeps track of a number of values such as where it is in the source file, the line number in the memory buffer and the character pointer (CP) on the line. These are altered as you move around the file and memory buffer.

I'm not going to give a fuller explanation of how to use ED here because the CP/M 2.2 Operating Manual has a good section on the CP/M Editor. I do, however, want to show it being used properly in the video below. Further down in this article I have highlighted some useful command sequences.

ED has a macro facility which allows you to repeat a sequence of commands as many times as you like. This makes it a good example of the power of ED and the following is a typical macro which searches through the memory buffer and displays any occurrences of the text 'CPM', pauses in case you want to stop the macro and then replaces it with 'CP/M'.

The 'M' command will run the sequences of commands that follows it until an error is raised, such as end of file. If we wanted to we could prepend 'M' with a number to indicate the number of times we want it to run. I'll break down each command in the sequence below:

^Z in the above is CTRL-Z and indicates the end of an argument for a command.

The above macro could also be written:

Below are some useful command command sequences which may be overlooked when reading the manual for ED.

In the table above the following holds true:

I know that I'm in the minority, but I'm sure there must be other people who also like ED. I'd love to hear if I'm not alone in this. You can leave comments via the links below or via the YouTube video above.

The videos below show ED being used properly and some of the things that make it great, including searching and replacing text, copying and pasting, macros and handling files bigger than the available memory. There are two videos below, the second is a concise edit of the first so there is no need to watch both.

I Love ED on CP/M

This is a fairly detailed demonstration of most of ED's commands.

A Very Quick Tour of ED

This is a concise edit of the first video down to about 5 minutes long. It showcases most of the commands but doesn't give as detailed an explanation.

I Love ED on CP/M by Lawrence Woodman is licensed under a Creative Commons Attribution 4.0 International License.

To do any serious programming under CP/M, the first thing you need is a good programmers editor. There aren't many in the archives, but I have tried most of them and found ZDE to be the best. It is s...   Read More