z80pack is great for creating an emulated CP/M system. It can either be used to create a general CP/M system or can emulate a specific system such as an IMSAI or ALTAIR including a graphical front-panel. It is well documented and is being actively developed.

This leaves a few bash scripts in the ~/z80pack/cpmsim/ directory, cpm2, cpm3, mpm, etc, which automatically start the emulator by booting into CP/M 2.2, CP/M 3.0, MP/M, respectively.

z80pack includes a number of disk images in ~/z80pack/cpmsim/disks/library/. These can easily get corrupted so it makes sense to backup these first:

I also keep my own disk images of useful software in the library/ directory and keep a backup in the backups/ directory as well.

We now needed to create some disk images; to do this I recommend Cpmtools which is a part of many Linux distros. If you don't have this as part of your distro, the source can be downloaded from here. Cpmtools is a great collection of tools used to manipulate CP/M images and file systems in a variety of formats and works well with z80pack.

The emulator uses 8" SD disk drives as the first 4 drives: A:, B:, C:, D:. This disk specification is the default for Cpmtools. To create a floppy diskette image called, work.floppy.cpm, run:

When working with floppies I create a blank floppy called blank.floppy.cpm and then just copy that every time I want to create a new image, rather than creating the image directly.

z80pack supports a 4Mb hard disk image connected to the I: drive and a 512Mb hard disk image connnected to the P: drive. These can be particularly useful when dealing with bigger applications such as a C compiler.  To create these we can use Cpmtools, but first we need to make sure that it has the correct disk definitions by editing the diskdefs file typically found in /usr/share/ or /usr/local/share/ and adding the following lines, if not already present:

CP/M has 16 'user areas' which can be used to organize data on a disk. They are effectively like a crude directory system. User area 0 is the default and the only one we will work with in this article.

To copy all the .DOC files from the current directory into the image, work.floppy.cpm in user area 0 run:

To copy all the .COM files from the current directory into the hd4.cpm image in user area 0 we need to specify the format with -fz80pack-hd:

To copy all the .DOC files in user area 0, from the work.floppy.cpm image to the current directory:

In the ~/z80pack/cpmsim/ directory there are a number of scripts such as cpm2, cpm3, etc. These are scripts which tell z80pack which disk images to use for which drives. We can edit these or create our own. z80pack expects the disk image files to be in ~/z80pack/cpmsim/disks/ with the first four 8" floppy disks called drivea.dsk to drived.dsk, the 4Mb HDD called drivei.dsk and the 512Mb HDD called drivep.dsk. You don't have to have all these disks, but this is what is available to be used.

As an example we'll create a script called work which uses our 4Mb HDD and floppy disk images created above. First copy main.hd4.cpm and work.floppy.cpm to the ~z80pack/cpmsim/disks/library/ directory. It is also worth copying them to the backups directory as well: ~/z80pack/cpmsim/disks/backups/

This attaches the two CP/M disks on drive A and B, our work.floppy.cpm image on drive C:, and our main.hd4.cpm image on I:. I copy rather than create links to disk images I know I don't want altered to keep them in a consistent state. The line ./cpmsim -f4 tells the emulator to run at 4Mhz, which makes it a bit more realistic.

To make the script executable run: 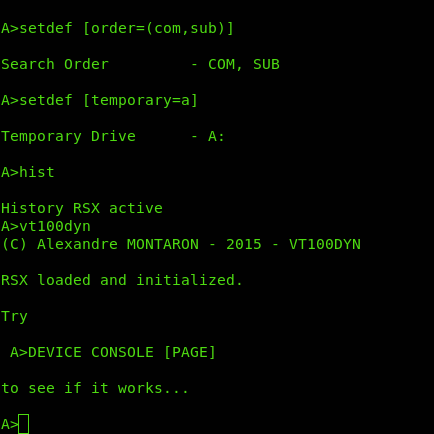 From the ~/z80pack/cpmsim/ directory, run the script we created:

For here you can run the normal CP/M commands such as DIR and start exploring.

There is a command on the A: drive called bye to leave the emulator:

I have a growing number of CP/M articles on this site and there is also a CP/M Playlist on the TechTinkering YouTube Channel.

Emulating a CP/M System With z80pack by Lawrence Woodman is licensed under a Creative Commons Attribution 4.0 International License.

Using Vice to emulate a Commodore 128 running CP/M works very well, but it isn't easy to get CP/M files directly onto and off a .D64/.D71 disk image. The easiest way to do this under Linux is to use c...   Read More