The C64 used a fatter double-width font because the video quality of early VIC-IIs wasn't very good. Therefore they had to make the C64's font fatter than the VIC-20's. However, this fatter font look quite nice and there's an easy way of replicating something similar on the VIC-20.

Rather than loading in a whole new font we can double the width of the existing font stored in ROM to create a new fatter font in RAM, which we can then point to. 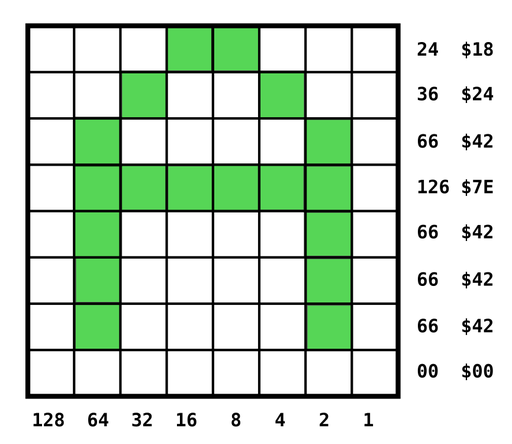 Each character definition is stored in ROM and for this demonstration we'll base our new fatter font on the uppercase characters stored from location 32768 ($8000). Because this example is for an unexpanded VIC-20 we'll only use the first 64 characters.

The Vic uses 8x8 fonts as default and each character definition is stored as a series of 8 bytes with each byte representing a row of the definition. 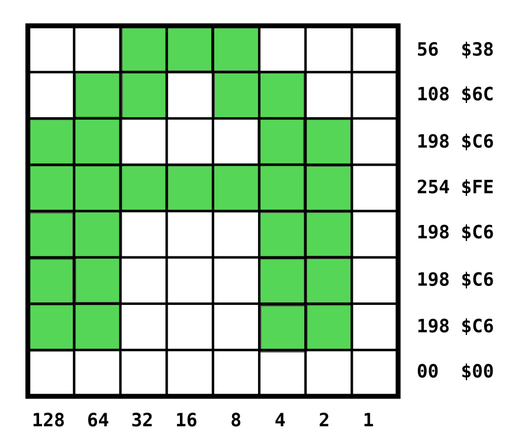 To create the double-width font we get the value of each line of the original font, double it and then OR it with the original value. This has the effect of doubling each pixel's width in the character definition.

This looks like the following where a equals the original value of the row in the character definition and b is the new value.

All we need to do then is go through each row of each character definition and store the results in RAM. Once we have stored them in RAM, we use location 36869 ($9005) to set the character map address to our location in RAM.

A Short Program to Create a Fat Font

First we'll create a little routine in assembly language to create the double-width font in RAM from location 7168 ($1C00). This location is being used because we are creating a custom character set with 64 entries and 7680 (Start of screen memory) - 512 (8*64 characters) = 7168.

Thanks to C.S. Bruce for his suggestions to make this more succinct.

Next we assemble the routine to machine code using location $02A1-$02BA to store it in.

Finally we create a short program to load the machine code routine into memory, execute it and point to the new character map. 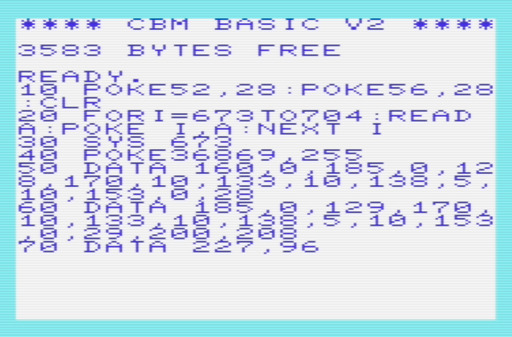 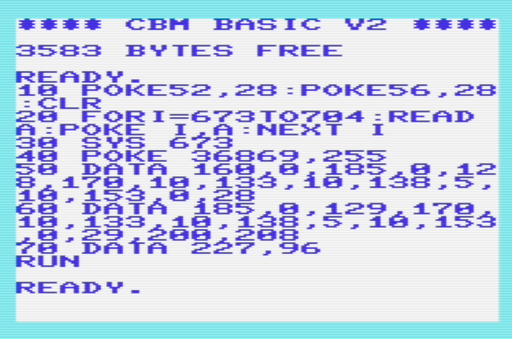 It is worth highlighting a few points in the code:

The double-width fat font can be seen in the following video.

Double-Width C64 Style Font on the Commodore VIC-20 by Lawrence Woodman is licensed under a Creative Commons Attribution 4.0 International License.


The unexpanded Commodore VIC-20 only had 5K of RAM and therefore creative ways had to be found to maximize the available RAM. The display memory would use some of this memory and therefore one option ...   Read More