BBS Ads were important to users and sysops of BBS's. There wasn't any universal directory like the phone book, and during the heyday of BBS's (early '80s to the mid '90s), most people couldn't easily access the Internet. Every BBS had a different atmosphere. It was important to attract users and create an active board. The more users you had, the more people there were to talk to; the more users uploaded files, the more there was to download. Therefore attracting and keeping users was critical.

Commercial BBS's were able to advertise in computer or BBS magazines, but while some hobbyist boards were able to get a mention, most had to rely on other means.

The majority of BBS adverts were text files, but there were also small executable intros which helped some boards stand out. These files would be passed around using a variety of methods. Lots of BBS's would automatically add an advert file to each archive that they held. If that archive was downloaded and uploaded to several BBS's then you may have lots of adverts within any one archive, which could be interesting to see which BBS's it passed through.

There would often be a lot of rivalry between BBS's and some would detect the adverts of their foes and delete them before adding their own. Despite that rivalry, most BBS's were pretty friendly and would often have adverts for other BBS's before you logged-off, particularly if they had some form of affiliation, e.g. they belonged to the same hacking/art/demo/etc group.

From the mid '80s ANSI art started to become a popular way of getting more out of text. ANSI allowed you to use not just the roughly 128 ASCII characters, but the full 256 characters of code page 437 in 16 different colours. This extra ability led to the formation of many ANSI art groups that created some very impressive works. ANSI was often used to create more advanced text adverts and got to the point where the adverts became so elaborate that people started creating collections, and many BBS's even had a file area specifically devoted to BBS ads. 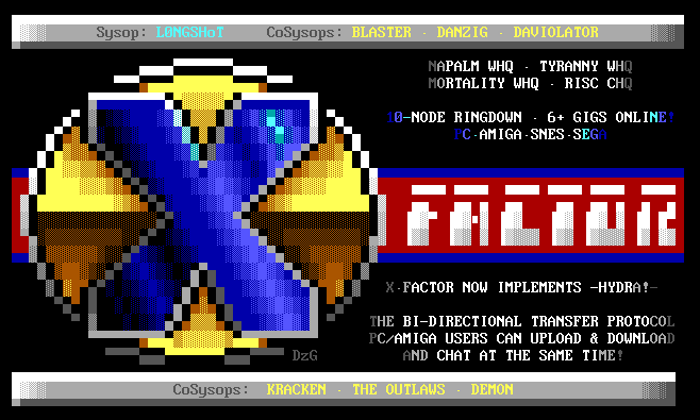 With the rise of FidoNet and other similar networks from the mid '80s, sysops started using discussion groups, such as FidoNet's BBS ADS to post adverts for their BBS.

Despite all these adverts, not every board was so welcoming. There were many that while they advertised, they only wanted the right sort of person. This could be someone with access to Warez (Pirated software), or knowledge of hacking/cracking/phone phreaking/etc. You would often have to be recommended or prove yourself to gain access to these boards.

Layout of an Advert

The name of a BBS was important. It was often elaborately drawn using ASCII/ANSI characters, and usually hinted at what to expect. If the name wasn't helpful then the rest of the advert would quickly give you an idea of the sort of content and atmosphere you would find there. There were BBS's for a whole range of interests and communities, from those with a particular technical focus such as Commodore computers or Ham Radio to those with a community focus, such as for Christians or LGBT people.

BBSing was very unregulated and had a wild-west sort of feel to it. Boards therefore represented a wide spectrum between elite illegal underground BBS's to mainstream family friendly ones. The elite BBS's would often stand out by their use of leet, where capitals and lowercase were mixed-up, numbers would often be used instead of letters and sometimes letters would be made from other characters. 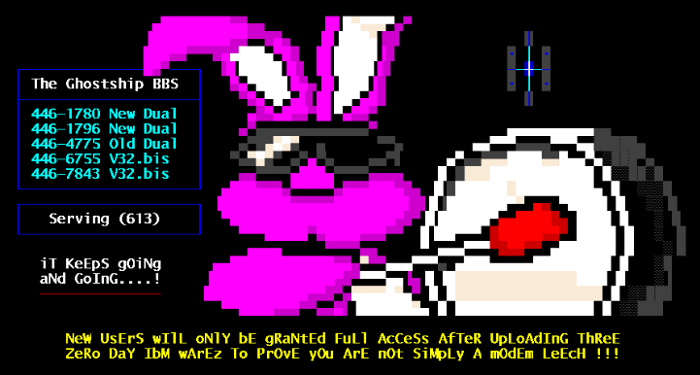 Every board offered something different through its adverts. This could be the amount and type of files it had, its connectivity to mail networks such as FidoNet or the number of game doors running. From the early '90s some BBS's provided Internet connectivity. It started out with Usenet and an Internet email address, then progressed to the point where some Unix BBS's were offering a shell account which would allow you to access Gopher and FTP. This was many people's first taste of the Internet.

Once the advert had described the board, you needed to know the specifics of connecting to it. Early on it was important to state the modem connection speeds that a board would operate at, this would be something like: 300/1200/2400. Many would also say how many nodes/phones lines they had, to give you an idea of its size and your ability to access it. The majority of BBS's were free to access, but many had upload/download ratios. So you had to upload a certain amount of files in order to download files. This would often be stated on the ad, particularly if the ratios were very good or not there at all. Finally the BBS would give its phone number. That is unless it was an underground BBS, which didn't always give a number, so you would have to ask around among your leet contacts. The key thing about the phone number was first the country, followed by the area code. Phone calls could be expensive so most people would mainly call within their area code to keep the costs down. 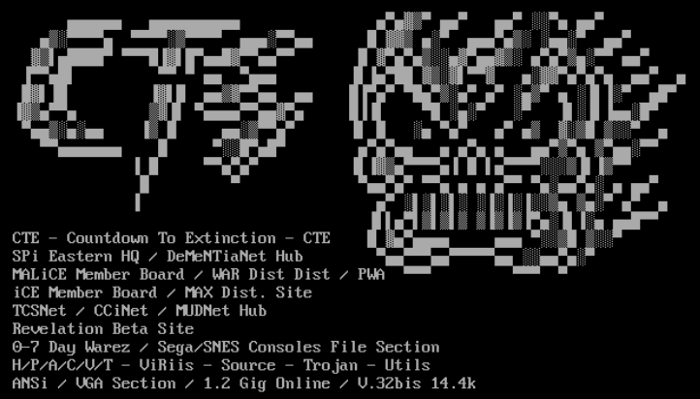 It was also quite common for an advert to list the type of hardware it was running on and what BBS software it was using. The latter was useful because, after a while, you'd get used to the typical ways a board would operate with certain software. If you had access to lots of boards, then you could afford to be more choosy and people would often avoid or be attracted to a board depending on whether they liked the interface provided by the software.

Other Forms of Promotion

Because of the constant need to appeal to users and get noticed, sysops used all sorts of methods to both help users to find them and to stand out. The most organized were BBS listings, which would feature BBS's, often grouped by area code. These would get passed around between boards to start with and later on were organized by a single person,group,or board to which sysops would submit the details of their BBS. The list would be updated and then circulated usually on a weekly or monthly basis.

If the BBS had a group associated with it or the sysop produced any content, then the BBS would often be mentioned in their works. This could be textfiles, demos, art, cracked game intros, etc. On BBS's that held images, particularly adult images, it would be common for a BBS to add a small advert to the image.

Once mail networks such as FidoNet were established, sysops could use the origin line as a little advert for their BBS. Therefore every message sent via their board would have a micro advert in it. If they then posted over a mail network, they would sometimes add a slightly more elaborate advert as their signature.

Because files are a much less important part of the BBS scene that remains, adverts within archives are naturally less common. The main place you will see text adverts today is through discussion groups such as FidoNet's BBS ADS or Usenet's alt.bbs.ads. The biggest change has come from websites for individual BBS's and websites devoted to maintaining lists of BBS's.

To see more historical adverts take a look at the textfiles' BBS Ad Collection and the Dipswitch/DCS^BM BBS Ad Collection. Although BBSing isn't what it was, it can still be great fun. There are many hundred's of BBS's running, which you can find via: The Telnet BBS Guide, bbs-scene.org and Commodore BBS Outpost.

BBS Ads: Getting the Word Out by Lawrence Woodman is licensed under a Creative Commons Attribution 4.0 International License.

The VIC-20 introduced many people into the world of BBSing, but only a few of the many terminal programs that were available for the Vic have survived. They each have their own pros and cons and here ...   Read More


As soon as you pick up this coffee table style book you know that you're in for a treat. A quick flick through reveals page after page of beautiful photos accompanied by well layed out text descr...   Read More


The premise of this book is that the 60s/70s counter-culture led to the personal computer revolution. I think the book demonstrated well how this influenced SAIL and how the Augment lab innovation...   Read More


Most BBSs that are still running now do so via telnet. In many ways this is great as it allows people from all around the world to access a BBS as if it were local to them. The problem comes though, ...   Read More