I watched 'Three Days of the Condor' the other night and loved seeing what I believe is a Dec PDP 8/E being used. Also featured in connection with this machine was a DecWriter, paper tape reader and possibly a VT-52 video terminal.

The film revolves around a CIA researcher, Robert Redford, finding out about a secret section within the CIA, and their attempts to silence him. 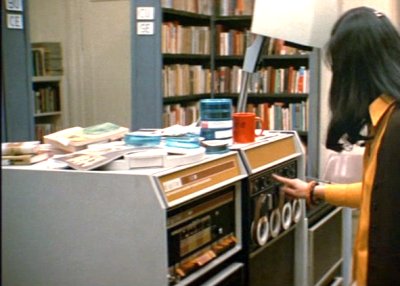 While the film itself is great, I was really pleased to spot the PDP 8, and was interested to see it doing OCR scanning. I am told that it was indeed used for OCR scanning sometimes and there were even add on cards to improve the speed of this. The computer isn't in the film for long, but it does show a computer operator unloading a Dectape, although things don't turn out well for her, as you can see from the final picture. 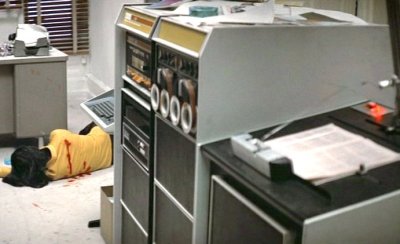 4K FORTRAN was a subset of FORTRAN II and was the first high-level language available for the DEC PDP-8. It consisted of two parts: the 4K FORTRAN Compiler (nicknamed "Fivetran") and the 4K ...   Read More


Before re-writable storage devices, such as tape drives, become popular for the DEC PDP-8, owners had to rely on paper tape. This was fine for loading programs on pre-punched tape, but left the proble...   Read More


The DEC PDP-8 mini-computer was launched on 22 March 1965 and was a great success. It was fairly cheap for the day and could easily be expanded. What attracts me most to the PDP-8 is its simple desig...   Read More